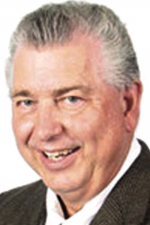 Norman Dierschke, real estate broker since 1972, has sold real estate in San Angelo since 1980. Since 1997, he has been in partnership with his sister-in-law, Binnie Dierschke, owning Dierschke & Dierschke REALTORS. They have 30 agents associated with the firm, and handle residential, commercial,farm and ranch properties and property management.

A native of the San Angelo area, Norman graduated from Wall High School and San Angelo College. He completed his formal education in 1966 receiving a BBA in Marketing from the University of Texas at Austin.

Norman has been very active in the San Angelo, Texas and National Association of REALTORS. He has served as chairman of the Texas Broker-Lawyer Committee, which writes the contract forms used by real estate practitioners. He has served in many capacities in the local association, most notably president in 1987 and in 2002. He has received many awards including REALTOR OF THE YEAR in both 1989 and 2003. Norman received the 2010 Distinguished Service Award from the Texas Association of REALTORS for over 25 years of outstanding participation. Norman is a Certified Residential Specialist (CRS).

Married to the former Linda Book, who is also an agent in the firm, he has three children and nine grandchildren. His outside interests include hunting and active participation in the Knights of Columbus.